Check out our other stores:

Diabetes and the Glycemic Index

Although the Glycemic Index (GI) has been around since the early 1980’s, its popularity has grown in recent years, largely due to its role in diabetes management.

The GI is a reference used to determine the effect certain foods may have on blood glucose levels. Carbohydrates in our diet, including starches and sugars, are digested and converted into glucose by the body. Glucose is then absorbed into the blood stream and circulates to all cells providing them with energy via the action of insulin. Certain foods perform this sequence faster than others and result in a faster rise in blood glucose levels. This is called the glycemic response. The GI ranks foods based on their glycemic response in comparison to how blood sugar increases after eating the same amount of pure glucose.

A major determinant of the GI of a food is the rate of carbohydrate digestion and metabolism. A food that is easily broken-down during digestion and quickly absorbed has a high GI value. The blood glucose response is fast and high. A food that is digested and absorbed slowly has a low GI value. Foods can be classifies as having a low, intermediate, or high GI with glucose as the reference standard. Some foods, such as legumes and milk products, tend to have low GI values while other foods vary from low to high within their food group.

A lower GI diet may be beneficial for diabetes and weight management. The slow digestion and gradual rise and fall in blood glucose after a low GI meal can help control blood glucose. The use of low GI foods helps to prevent extreme blood glucose changes and the slow absorption of carbohydrates means the pancreas doesn’t have to work as hard to make insulin. Introduction of the GI for diabetics can expand their food choices and focus on other nutritional aspects of food than just sugar. Low GI foods also seem to contribute to fullness or satiety, which can help with weight loss. However, not all low GI foods are helpful in managing diabetes. For example, a high fat premium ice cream is a low GI food loaded with saturated fat and high in calories. Low GI foods to focus on include high-in-fibre fruit, beans, lentils, whole grains, vegetables, nuts, and low-fat dairy products. Check out the list of foods and their GI values featured at the end of this article.

Cooking or processing of starch: When a starchy food is cooked, the starch granules become swollen (gelatinized). Less gelatinized starch is digested slower resulting in a lower GI food. An example of this is pasta cooked to al dente is slower than overcooked pasta.

Sugar: Sugar helps prevent the gelatinization of starch granules. An example of this is Frosted Flakes cereal which is a slower carbohydrate than Corn Flakes.

Fibre: Soluble fibre slows down the interaction between the starch and our digestive enzymes and therefore foods with soluble fibre are slower carbohydrates. For example, rolled oats (not instant), beans, lentil and apples have a low GI.

Protein and fat: Both slow down the rate of stomach emptying and digestion of carbohydrates. Examples include yogurt, milk and legumes.

Acids in foods: Acids slow the rate of digestion and absorption. Adding vinegar, lemon juice and acidic fruits will lower the GI of a food.

Liquid vs. solid: Apple juice, due to processing, has a higher GI than apples.

The glycemic index should be individualized for each person. If you are doing frequent blood glucose checks, about six to eight times a day, and you see the impact of certain carbohydrates on your blood glucose, you can establish your own GI, since each person's body is different. Whether a food has a low, medium, or high GI index doesn’t matter when eaten as part of a meal, meaning a mixed meal of protein, fat, and carbohydrate. 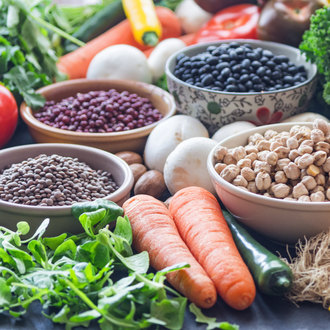 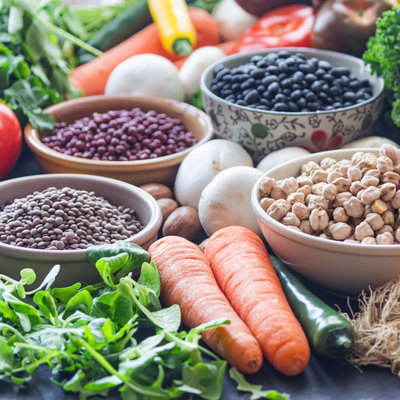 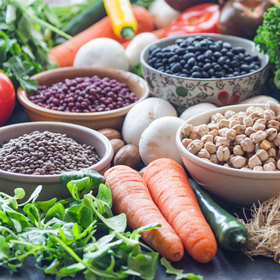