Check out our other stores:

Barbequing is a fantastic, quick, and simple way to cook foods in the warmer months. As long as you don’t char your food it can be healthy too. However, it is easy to get food poisoning if you don’t take care and avoid cross-contamination. Food poisoning is often mistaken for the 24-hour flu because it has the same symptoms so beware! Beef and chicken are the most common sources of foodborne illness. Raw, these foods are not the best environment for Salmonella and E.coli to grow because there are too many competing organisms in there. However, undercooked, or cooked and re-contaminated, the competition is killed and E.coli and Salmonella can flourish.

-Be sure to cook the meat thoroughly. Use a meat thermometer.

-Don’t pierce meat to allow marinade to penetrate as this also allows the pathogens to penetrate to parts of the meat that may not reach hot enough temperatures.

-Don’t use the same basting brush for cooked and raw meats.

-Don’t use the marinade from raw food to baste cooked foods.

-Wash your hands thoroughly with soap and water after touching raw meats.

-Don’t use the same cloth to wipe up raw chicken juice as you do to clean the cutting board for cutting foods that won’t be cooked.

-Keep cold foods cold at 4 degrees Celsius. Don’t leave food out at room temperature for more than 2 hours. At parties, serve half the potato salad or vegetable dip and then replace it with a fresh bowl from the fridge 2 hours later.

-Put your sponge or dishrag in the dishwasher or wash in a dilute bleach solution on a daily basis. Microwaving for one minute on high also works to kill organisms.

-Use bleach to disinfect countertops and cooking surfaces.

-Don’t save leftovers from picnics for another day if they have been out of the fridge for more than 2 hours. Discard them.

-Don’t rely on smell. Many toxins produced in foods don’t smell but still make you ill.

- Defrost foods on the bottom shelf of the refrigerator in sealed containers or wrap them in plastic and place them on rimmed trays or in bowls to prevent drips from contaminating other foods.

- Always clean a thermometer after using it on one piece of meat, before inserting it into another to be tested.

- Have two cutting boards- one exclusively for raw meat, fish, seafood and poultry and another for produce to reduce the risk of cross-contamination.

- If you prepare a marinade that you also want to use as a dipping sauce, remove and reserve the amount for dipping before adding raw meat, poultry, fish or seafood to the rest for marinating.

- Never use the same plate or tray for raw and cooked meats.

- Keep ready-to-eat and cooked foods separate from uncooked foods in the fridge or when packing a cooler.

The Bottom Line: Keep on grilling – just take care when dealing with raw meats and their juices. 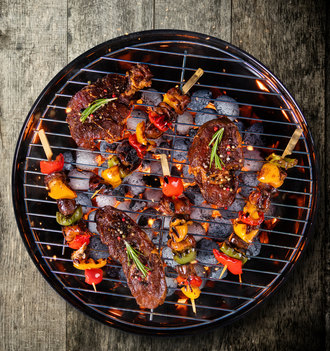 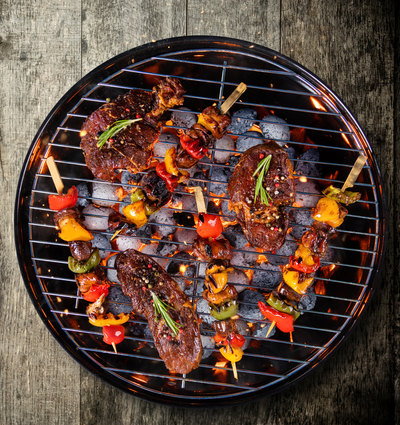 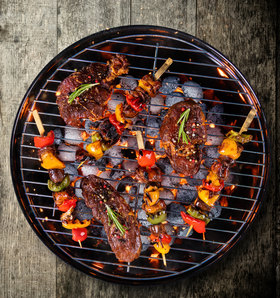